“Honor at Stake’ a gripping read

Posted by Patrick Richardson on September 2, 2015 in Uncategorized 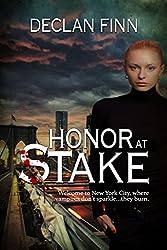 “One is a heartless, merciless killer. The other is a vampire.” Thus begins the description of the latest work by Declan Finn, Honor at Stake. Before you say, “no not another vampire story” remember that in the right hands, the worst trope can be a spun into a great story as John Ringo did with zombies in his Black Tide Rising novels.

Mr. Finn delivers one of, if not the most unique and plausible explanations of the vampire mythos that I have ever read. The plot is interesting and engaging, with more twists and turns than the New York City neighborhoods and trains that the tale winds through. This is not a story where you can read a quarter of the way in and figure out how it will play out, which can happen all too often in urban fantasy. The main characters are both well developed and believable and the budding relationship works despite the age difference, because they are emotionally about the same age. in fact, this books works both as urban fantasy and Young Adult without insulting an older audience.

The exposition of how Catholic theology can support the concept of vampires and how they are portrayed in the story is handled in several small doses, and is built upon over the course of the first half of the book. Mr. Finn deftly avoids overwhelming the reader with an eye glazing infodump by allowing the characters and the readers to learn and put the pieces together as the story progresses.

The main criticism that I had reading the book is that Mr. Finn introduces so many characters that you need a spreadsheet to keep up. On one hand, he does make use of almost all the characters he introduces, but on the other hand its pretty obvious that he wants you to see some of the players in the next book in the series. Gripping hand, Finn stays just on the right side of a well developed cast vs a muddle of characters. Also, a minor quibble, one of the characters is a doctor who runs a private clinic/hospital that seems to always have what the author needs to advance the plot to the point that suspension of disbelief is a bit strained. Finally, like the number of characters, Mr. Finn pushes the envelope of romantic angst The growing closeness of the main characters and their “just friends” declarations are a running joke and topic of conversation for the secondary characters that is almost run into the ground.

I can’t say enough how much I enjoyed the complexity of the characters and the plot. I really can’t because it’s impossible to explain most of it without giving away spoilers that will lessen the enjoyment of the book. Let me say that just when you think, the story is about to descend into cliche and implausibility, the characters take a leap into an entirely unexpected direction that makes what came before make perfect sense.

On balance, Honor at Stake is a excellent first volume of a series that provides a gripping story that comes to a satisfactory conclusion while making it clear that the reader has not seen the last of Amanda and Marco.

← Mad Scientist’s Apprentice: Killer Class Loads
Give it a rest →

One comment on ““Honor at Stake’ a gripping read”