Posted by sanfordbegley on September 17, 2015 in Food, GeekLife 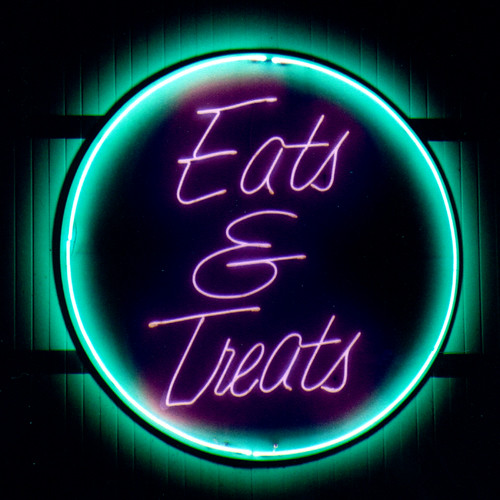 Dining out! That has always been a thing for people. To be able to go somewhere the wife doesn’t have to do the cooking. Or the husband, depending on the household. It is supposed to be a treat, these days too many people see it as the only way to eat. I know people whose stove is broken for months before they even notice it. That is a literal fact about one couple I know. The husband noticed it when he was trying to heat a thermostat on his car to make sure it was functioning. The stove wasn’t, his wife didn’t notice for another three months. They might be an extreme example, but I doubt it. So the question in my mind is, with everyone eating out, what happened to local restaurants?

I was rereading a novel from the 60s the other day and the hero, a private detective, was looking for one of his contacts. He finally ran him down at  the local place stuffing his face with corned beef and cabbage. Can you imagine finding a place that served corned beef and cabbage today? You won’t find that at Mickey Ds, or your favorite chain anything. You won’t find meatloaf either.

This is going to sound like another of those “I’m a grumpy old man, get off my lawn” posts, it really isn’t. It is a look at changing social mores and attitudes. You see, back in the days of the dinosaur, when I was a lad, every town had at least one local restaurant. These places varied in menu and quality. This was because they were all started for different reasons and run and staffed by locals, who would never have considered the benefits of homogenizing the menu to appeal to broader tastes. In fact, most of the people starting and running them had no idea what homogenizing meant. They got their starts because mom was the best cook in town, or at least her family thought so, and dad thought they might make a living at it.

Many of these places had an ethnic background, O’Malley’s had good Irish meals because Ma O’Malley was Irish, while Pasquale’s was Italian themed for similar reasons. Both places thought they were American places because they considered themselves Americans. The fact that they had ethnic foods was because everyone had ethnic foods, without ever realizing it. It made for amazing variety while all the places had some basic similarities. You got cakes and eggs with your morning coffee, and could get a burger for lunch.

Somewhere after the advent of McDonald’s the chains began chipping away at the local places. This was not entirely bad. While most chain restaurants are not particularly good, very few of them are particularly bad. Yes, yes, I know, you are going to point out that Mickey D’s which I just used as an example is a travesty on food yadda yadda. Any of the fast food chains are basically lowest common denominator providers. The food may not be good, but it is tolerable and cheap. The more well thought of chains are a bit more expensive, but just as bland.

Why did these changes occur? I think that might be a doctoral level dissertation, still some things are obvious. We move more in our society today and chains are reliable: comfort food if you will. It used to be that restaurants advertised “home cooking”, now there are product lines in grocery stores pushing themselves as real “restaurant style” products. a rather odd inversion to me.

The wife and I have discovered that we are foodies, a surprise to both of us.  We search for out-of-the-way restaurants with menus that are not the standard burger/steak/chicken sameness of modern restaurants. We sometimes review them over at Cedarwrites . The thing that I most noticed is that 90% of the places we really like are ethnic, and odd ethnic as well. Lebanese or Korean or Turkish places. I wondered why for a bit, since we cook at home and can cover a wide variety of cuisines between us. Then I realized it was because chain restaurants are boring. Applebees is like TGIF is like  Max and Ermas is like… We want something different and good. Right now we are looking at trying a Congolese restaurant we have heard of in Cincinnati. We are still looking for a good Greek or German restaurant in our area.

What we would really like is a return to the days when every town actually had restaurants that were truly local and unique. I want to stop at Pasquale’s for his Italianized version of meatloaf, sit at the local “liar’s table” (Liar’s table is the area where the locals who have time sit and gab, it used to be a social clearinghouse for every small town) and know that I can drive five miles to the next town and have O’Malley’s Irish Stew for dinner.

15 comments on “Dining out”