Ask a Geek Anything Volume 21

Good Morning, and welcome to Ask A Geek Anything, Volume 21  Hey, we’re legal!

Our first Question is from Elisa who asks- How do I send a picture of the item I am trying to get an answer on what it is?

Fielding this one is our very own Mistress of the net: (it’s like being Mistress of the dark, only cooler) Amanda Fuesting, who answers:   I’m not entirely sure what you mean here, so I will answer what I think you are trying to ask, which is how to send a picture of an item. I will also include contact information at the bottom of this answer for Ask A Geek Anything, in case what you wanted to know was how to send a picture of something to us. This largely depends on the medium. In e-mail, you would hit the attachment button in the email and select it from the file it’s in. Click on the name of the picture you want to attach, and then click on “Open” or “Attach”. I’ve provided pictures so you can see how it is done in Gmail. It shouldn’t be that much different in other email types, so this should give you the general idea. 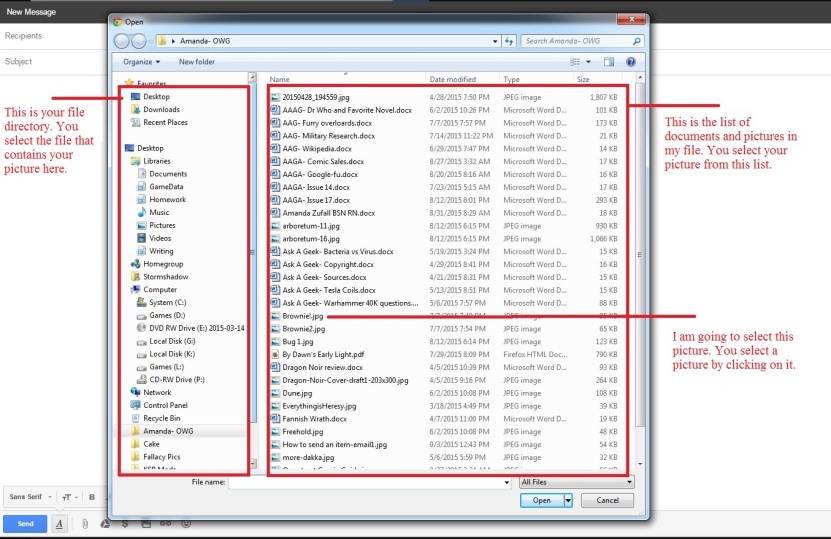 Wow, That took up a lot of space…

OK, next up is a Question from Jacob Edward Swan who asks: So, what’s the problem with vampires, anyway? Depending on who’s writing them, they can’t seem to figure out if they’re allergic to sunlight, crosses, religious anything, and then there are the ones that sparkle. Can’t these people make up their minds?

and to answer this we’ll call upon that delightful demon killer Declan Finn, who answers:

To start with, my condolences on your name. I’d at least consider changing it to something more manly. “Chuck Norris,” maybe?

Anyway, to answer your question, the issue of vampires and their lore are a combination of things. On the one hand, there is a trend within basic media to trend towards the secular – ergo, let’s toss the religious aspects out of it. How they reconcile a supernatural creature like a vampire without having anything supernatural otherwise is beyond me. Then there’s the Blade movie vampires, which makes them either some variety of either mutants or radioactive – it’s Marvel, so I think those are the only two options.

You have more recent authors who are simply trying to be original, and actually go further back in time in order to establish their vampire lore, capitalizing on the fact that hemophagic (blood-drinking) monsters turn up in cultures that predate Christianity (see: The Lamia, or Lilith, or Middle Easter ghuls). Lynsay Sands, who specializes in vampire romances, has done this well, spinning “Immortals” (not vampires) as being a result of Atlantean nanotechnology that runs on blood, and sunlight just causes them to work harder to repair UV damage. Not much of a plot sometimes, but they’re mostly fun, and entirely harmless — starting with the one about the vampire and her psychologist (http://amzn.to/1KhUnHg). There’s also Sherrilyn Kenyon, who prefers to use Greek mythology to run her world of weird (http://amzn.to/1WYkTJj). Then there’s Kerrelyn Sparks, who can’t seem to decide on how much is science and how much is magic, and how much is sufficiently advanced biology, but she’s got some fun bits of business along the way, including a Vampire tv network with their own version of The Bachelor (http://amzn.to/1Ks4LLj).

As for the ones that sparkle … don’t even get me started. Just don’t. They’re supposedly from a Native American version of the vampire myth, but I’m wary of any tribe that wants to accept responsibility for that.

In short, the more traditional vampires have gotten quite the bad rap lately. To my knowledge, there are only four people who have gone out of their way to use some variation on them recently, keeping the basics – immolation in sunlight, harmed by religious artifacts and silver, killed by beheading or a stake to the heart.

One is the Anita Blake novels of Laurell K. Hamilton, which went from solid, serious world building to seriously smutty. Somehow, it’s the person’s personal faith that runs the cross … which is strange, since if you’re waving the cross, you at least have faith in the cross. The first few books are okay. Stop at Obsidian Butterfly, unless you’re into bisexual sextets with were-furries.

There is, of course, Joss Whedon, who had episodes of Buffy The Vampire Slayer where holy water and crosses were surefire deterrents if not active weapons against vampires. It always made me wonder why Buffy – or anyone in her crew – didn’t stop off in church more often.

Another is Larry Correia, International Lord of Hate. His Monster Hunter books also used faith and crosses to repel vampires, though he specifies that the individual must be seriously holy in order to get away with it. If you haven’t read them, click here. You won’t regret it: http://amzn.to/1KT6kgU

#4 is a more recent novel, Honor At Stake, where the author decided he had to show off that he had a philosophy degree. For longwinded reasons, vampires are good or evil, based solely on their actions – okay, that’s fine. The more actions they commit that are good or evil move them along a scale of power. Go to the dark side, become blasted by crosses and holy water and throwing Stars of David. Go to the light side, the vampire doesn’t even need an invitation to go into a house. It’s at least internally consistent. Why, yes, the author has admitted to basing that system off of Role Playing Game alignment system. For that, you can click here: http://amzn.to/1IXbcDz  Another one who has added to this merry band of blood suckers is our very own William Lehman. Granted, the focus of his novel is a former SEAL, and current Park cop and were-cougar. But he also comes with vampires. Enjoy.  http://amzn.to/1hpfLNJ .

And I’ll add to that, (as the aforementioned author) that my Vamps are allergic to sunlight (with the exception of a very few) susceptible to holy objects (but you have to have faith or it’s just a chunk of metal) and anything that kills instantly (beheading, complete destruction of the heart especially by silver) will kill a vamp.  Also wounds by other vamps or by weres will heal as if the recipient is human.  Has to do with the metaphysical virus that causes vampirism and the one that causes Lycanthropy.  It’s a fun ride, (book two is coming out shortly) but then I’m biased.

Well this has run long, so we’re going to stop at two answers today.  Also we haven’t gotten any responses yet to the question posted last week “What are the 10 most famous and classic SF stories/books that have become almost unreadable to today’s generation due to writing shifts and technological changes?” So we’ll leave it open for one more week before determining that there aren’t any!

Remember, you can now e-mail us questions ataskageekanythingowg@gmail.com or contact us through Facebook athttps://www.facebook.com/askageekanythingowg . We have all the old articles there and will update it every week with new ones, as well as take questions from posts. If you’re so inclined, we’d appreciate it if you could like and share the page, because we’re running really low on questions to answer!  If you don’t ask it, we can’t answer!

A retired submarine sailor and former cop, author of the John Fisher Chronicles, as well as a contributing author of the Otherwhere Gazette.