A Short Review for A Long Voyage 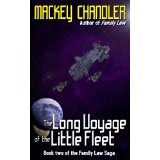 The Long Voyage of the Little Fleet (Family Law 2 by Mackey Chandler) is a fine story.

Family Law set the stage; a non-traditional family with an exploring background. The Long Voyage takes it further (pun intended) by expanding on the actual GOAL of the characters. Gordon and Lee are believable characters doing believable tasks in a believable setting.

The only aspect that is unbelievable was when I looked around and saw – not bulkheads and entry hatches – walls and doors in a mundane world, far indeed from the actions I was just envisioning.

Seriously, Chandler writes a mean story, and does it in a way that you *experience* it. I wanted to be there; I still do. I eagerly look forward to the next installment of the the Family of Gordon and Lee, their able and amiable companions, and their chosen lifestyle.

I’m especially pleased with the little touches he uses to add to the realism; for instance just a few years ago planetary scientists found a hexagonal pattern at Saturn’s north pole. While there is still speculation on the cause, it is possible other planets of like makeup will show similar patterns. Little details such as this add to the ambiance of the story.

← Ask A Geek Anything, Issue six
Inspiration and remembrance →