Posted by Patrick Richardson on April 20, 2015 in Uncategorized 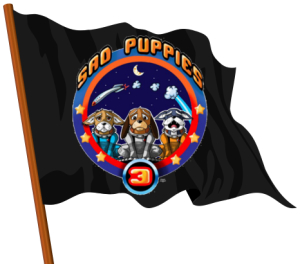 If you’ve been following the Hugos this year, you’ve probably seen the utter meltdown that occurred in the lead up to the final ballot being announced, and the even larger meltdown that occurred after it was announced. In all of this noise, one phrase stood out to me above all the others. Teresa Nielsen Hayden, on Making Light* indicated that Brad Torgersen was falsely spreading the message that Sad Puppies 3 is about trying to bring new people into the voting process in order to avoid “fannish wrath” after the ballot is released. That phrase has stuck with me, and I just realized why. The very concept of fannish wrath, in the way she means it, screams against everything that fandom means to me.

Sad Puppies started three years ago, mostly as a bit of fun by Larry Corriea. After pointing out that the Hugos had become controlled by a small clique of people who pushed politics before story, he was called a liar. He set out to prove his point by encouraging people to buy supporting memberships and nominate his book. He was nominated and attacked viciously, which is pretty much what he said would happen. He lost that year, but had made his point and was ready to walk away. However, his fans weren’t. He had planted a seed in those of us that remembered buying Hugo winners because they were almost guaranteed to be a fun read, only to grow disenchanted over the last several years because the books that were winning were full of message but not particularly fun.

Fast forward to Sad Puppies 3. Brad R. Torgersen led the effort this year, and decided to try to restore the Hugo back to an era when Hugos were awarded for books that were actually popular and well liked. The SP3 slate included writers from all across the political spectrum, about a dozen women, and a diverse ethnic background. That wasn’t really intentional, those are just the stories that people liked and asked to be included. SP3 succeeded beyond anyone’s expectations. When combined with Rabid Puppies, a completely separate effort by Vox Day and his fans, it almost swept the final ballot.

In the aftermath, there have been a ton of blatant hit pieces published online. Most of them boil down to some misguided (or just dishonest) idea that those participating are some flavor of bigot. Some argued against slate voting, which would be fine if they had been arguing against slate voting prior to SP. There is also a definite effort to link SP3 with Rabid Puppies and Gamergate. Neither of these efforts is associated with SP3, and any attempt to try to link them together is intellectually dishonest at best. If you’re so inclined, you can click through the provided hyperlinks and read some of them at The Boston Globe, Like Stuff, io9, Comics Alliance, and Salon. John Scalzi and nominee (Best Fan Writer) Laura J. Mixon also took to their blogs to express their misinformed outrage of SP3. The worst of this attack came in the form of an Entertainment Weekly article that can only be described as libelous. The archived version of the original article is here. It was edited within two hours, with a half-hearted retraction.

More disturbing to me, personally, is the implications or outright statements that the books on the slate are the wrong kind of books, or that those authors are the wrong kind of authors. The fans who spent money that could have gone to more books or a nice dinner out are the wrong kind of fans. We aren’t welcome in the precious sandbox of the Hugos. We aren’t wanted. We are despised for not embracing the right message, or just for the company we keep. I’m not an author. I’m not an internet celebrity. I’m not even a person who keeps a regular blog. I’m just a fan. I’m someone who loves good stories. I don’t know or care what gender, race, sexual orientation, or even nationality the authors of those stories come from. I don’t care about their politics. I usually don’t know any of those things at all, unless I happen to follow the author on Facebook. More than half the time, I can tell you every detail of a book I love except the author’s name. Let me tell you what fandom is to me.

When I was seven years old, in my school library, I found a mostly forgotten copy of Have Spacesuit Will Travel. I was forevermore in love with science-fiction. Sci-fi didn’t care that I was a socially awkward girl who hadn’t the first clue how I was supposed to interact with other people my age. It didn’t care that I was barely understood by my parents. Sci-fi was all about thinking new thoughts and exploring the universe with eyes wide open. There were alien races with odd cultures, new planets to explore, starships to fly, battles to be won, and boundaries to be pushed. My love for fantasy was even more pronounced. Whole new realities were there at my fingertips. Magic was real. People fought evil and won! I built my sense of self around these characters, these ideals.

I made new friends simply based around a love of the same author, the same characters. Sometimes, I met people who were eager to share something they loved with me. I got introduced to Star Trek, comic books, Star Wars, Firefly, Dr. Who, RPGs, and all manner of new authors. That is what fandom means to me. We meet on equal ground as people who love something with our whole heart, who dream big dreams, and think big thoughts. We don’t always love the same things, but we eagerly share the things we love with people who can appreciate them. We trade new interests and hobbies. It would have never in a million years occurred to me to tell someone else that something that they loved as much as I loved those books that shaped who I am today was a less important than my own interests.

When I see people raining hatred and impotent rage upon authors and fans, it fills me with dread. To watch voices be silenced in fear of being called racists, homophobic, or some other hateful name is my idea of a living nightmare. It angers me in a way I can’t even start to explain. To be told that the things I love don’t count as much as the things Teresa Hayden loves makes me sick. Fannish wrath, as I have always thought of it, is two Marvel fans arguing over some obscure point in the interpretation of a character. It’s what happed when George Lucas destroyed our collective childhoods with midichlorians.. The meltdown over Sad Puppies isn’t fannish wrath; it’s the mark of tyrants losing their control over the peasants.

Fandom shouldn’t be about trying to personally destroy people who disagree with us. I haven’t seen anyone on the SP3 slate calling for those who disagree with them to be personally destroyed. I haven’t seen them attempting to slander and libel those in the opposing viewpoint. I have seen a war of ideas taking place, one which someone may or may not agree with. Personal attacks, however, are completely different. I disagree with those who are arguing that the Hugos were unbiased these last several years. I wasn’t truly angry until after the final ballot was announced and the hit pieces started dropping. I was shaped by heroes who fought against evil at all costs, and what is being done to those who have organized SP3 is simply evil.

*Read Here Comment #728. This isn’t hyperlinked in the article because the thread goes on forever, and I wanted to be sure the reader knew which comment I was referencing.